These were the words by MVMT sports founder Simon Turner on a recent Zoom call with coaches.

This blog post aims to help and enhance your understanding of the harm sport causes. We will share with you three key insights supported by research evidence.

Here are 3 realities about sport that coaches can't ignore.

1. Players are experiencing harm (even if you can't see it)

At MVMT we support dozens of coaches and sports development professionals to learn the process of creating both sporting results and social outcomes at the same time.

We have found consistently that coaches focus heavily on the difference they can make for the people they coach, with little focus on the impact they can have on a wider community and often neglect the impact their coaching has on themselves.

A 2011 study commissioned by the National Society for the Prevention of Cruelty to Children (NSPCC) in the United Kingdom showed that harmful experiences in sport are not limited to a small minority of participants. This graph provides an overview of the types of harm young people experienced based on the evidence from the study. 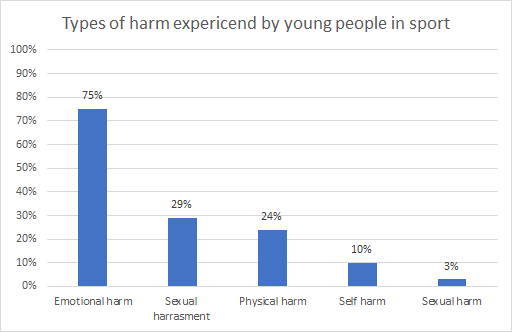 This shows that at least 3 out 4 of young people in sport have experienced harm, with 75% of participants of the study reporting emotional harm. Other types of harm and abuse while not as common are still happening at a concerning rate. These figures confirm that address the harm should be a focus for all coaches.

2. A narrow identity is more dangerous than competition

The NSPCC research found that coach's role in causing harm "increased as young athletes advanced through the competitive ranks". But increased levels of competition doesn't have to mean increased emotional harm.

However what the same study did find is that academy players reported a greater athletic identity compared to the more recreational athletes. This posses some risk as a narrow and one-dimensional identity can have a range of negative consequences in the short-and long- term as people inevitably encounter setbacks in sport (e.g. injuries or failing to progress to the next competitive rank). At this point, when the athletic identity is taken away, individuals may feel lost in the absence of any other identity, source of esteem or motive.

Parents, administrators, and athletes at all levels place an extraordinary amount of trust in sport coaches and expect sport organizations and administrators to implement and understand child protection measures as well as ensure that the need to assist victims supersedes their desire to protect their program

Research in the European Journal for Sport and Society shows that 95% of athletes trust their coaches. Athletes trust their coaches to protect them from harm and so it's important for coaches to honour that trust and focus on doing just that. This means going the extra mile and not making assumptions. The NSPCC research shows that coaches can directly contribute to harm or even do so indirectly by condoning, ignoring or not dealing with harmful behaviour effectively. They could be doing this without even knowing. As a coach being ignorant to harm is no excuse.

1. Get anonymous data on your team

Harm is happening in sport. It's happening without coaches even seeing it. This is why as a coach you need to question your environment. Challenge your assumptions within your team or club. Judge your environment on data, not just your experience.

Harm is a sensitive subject and not something everyone is comfortable or capable of discussing openly. Getting feedback anonymously helps address this problem. Allowing anonymous feedback can help protect the victims of harm while equipping coaches with the awareness they need to address the harm in their environment.

This can easily be done by creating an online survey and sharing this with players and parents.

2. Get feedback from those who leave

Your current players are not the only people who can provide valuable feedback. What about the people who leave? Do you have an exit survey with players who quit your team or sport?

Sport should be inclusive and accessible. If you don't know what might be driving players to leave you won't be able to address these problems. Don't just assume. Actively seek out feedback, whether its good or bad.

Try setting up an exit survey form for players (or parents) that enables them to share their views before they leave for good. Or, reach out to former players (not the ones you know already think positively of you) and ask for honest feedback.

Eliminating harm for sport will not be easy. But there are things that you can do on an individual level that can make a big difference. One of them is to train in mental health first aid.

A mental wellbeing crisis is on the horizon and coaches have to adapt as a result.

The Child Protection in Sport Unit

Satore-Baldwin, McCullough and Quatman-Yates - Shared responsibility and issues of injustice and harm within sport

Be a difference maker

Each week we send an email to coaches with one reflection question. It’s a short and easy way to bring clarity and purpose to your coaching. Sign up below (but only if you put people before winning).

At MVMT sports, we make the ‘tools of the trade’ for coaches who want to be difference makers. Our practice planning tools for football and basketball enable coaches to speed up the plan-do-review process and become difference makers for the people they coach.

We’re on a mission to help coaches use sport as a movement for good (not bad).

Enter your email address to join us

(but only if you put people first).

We're a mission-driven business for people who believe sport should be a movement for good (not bad).

We make the 'tools of the trade' for difference maker coaches.