What are your coaching principles?

A coaching principle is an approach you stick with even if you know it might lead to a short-term outcome you don’t prefer. Especially then.

It’s this gap between the short-term and the long-term that makes a principle valuable. If your guiding coaching principle is to do whatever it takes to win right now, you don’t have principles of much value.

It’s the valuable principles that pay off, because they serve as a compass, particularly when it feels like there are few alternatives.

Think about a group or team you are coaching this season (or, if you're not lucky enough to be actually coaching at the moment then think about last season). 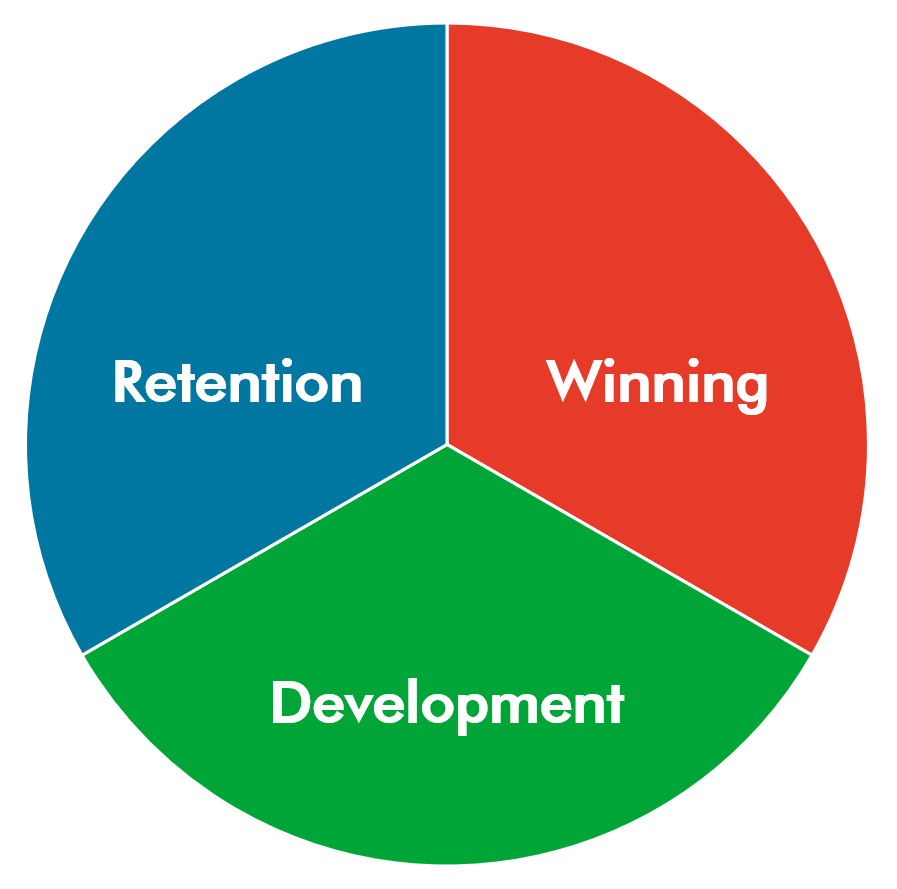 Now imagine you have a pie graph. Within that pie you have to allocate space to three guiding principles:

3. Retaining players within your team/programme

Now split that pie graph into three areas according to the weighting you place on each principle.

Are they all equal? What's the appropriate emphasis on winning for the people you coach? Does winning lead to retention or does retention lead to winning? Or, is development the answer?

We posed this question to JP Nerbun, Head Coach of Liffey Celtics in Ireland and founder of Thrive on Challenge where he helps coaches create transformative cultures. (twitter | linkedin)

It’d be great to say that I value all three equally, but the truth is that every coach has to prioritize one above the others nearly every day. So, my aim is not to seek a balance between these three goals but to be clear about my priorities.

Five years ago, as a high school basketball coach, I prioritized development in the hopes that we would reach our potential as a team later in the season, thereby leading to more wins. I was not just focused on player development but also personal development, character-building, and relationship development.

Player retention throughout the season and from season to season was likely at the bottom of the three, as I felt long-term retention was best achieved when people could feel and see their growth and development, as well as win games. Therefore, retention would be a result of development and winning. Also, I wasn’t trying to create a culture that was for everyone; we wanted players who were willing to buy into our unique way of doing things.

Currently, I serve as the head coach of a semi-professional team in Ireland. Rather than leading with my own priorities, I have allowed the current stakeholders to dictate our prioritization. Even in my job interview, team management communicated three priorities for the season: (1) retention of younger players, and veterans who had played with the club for years; (2) younger player development; and (3) being competitive within the league.

“However, balancing all three of these is impossible, as sometimes they are in conflict with each other.”

In one team meeting, I broke up the team into small groups and presented them with a few scenarios regarding playing time, player commitment, and winning. It was clear that they weren’t willing to “win at all costs” by allowing players who failed to meet standards to continue to play—even if it gave them a better chance to win. However, it was also clear that the player and personal development we were doing as a team were meaningless to them if we didn’t win.

We expected to win because of our talent level. If we lost our first three games, then our culture wasn’t in a place where people could still keep their focus on “development”. As a result, retention would suffer, as a few players would struggle with committing themselves to training.

Thus, our foremost priority is winning. Still, we have set clear standards for player commitment and attitude, and if they are not met, then we are willing to sacrifice winning to do so.

1. Coaching is not as simple as A-B-C

Hoping to grow your team or club by winning games isn't nearly as effective in the long term as providing players with an experience worth talking about. If you create experiences that are worth remarking on, your coaching becomes remarkable.

2. Complicated is not same thing as complex

The problem solving challenge of creating transformative cultures is not complicated but it is complex. Complicated is difficult, but complexity is about understanding how multiple simple elements fit together. Balancing wining, developing and retention is complex but if you get your priorities straight it needn't be complicated.

3. Being professional doesn't mean being a winner

Whether you're paid to coach or not, you can approach your craft like a professional, with the intention to develop players and retain people within your sport. Despite the prevailing win-first culture in sports, a true professional is intentional about creating change for people and communities.

1. What comes first for a player - competence, confidence or commitment?

2. What’s your most common reaction when you experience failure as a coach?

3. How much fun can you have with your team this season? How?

Be a difference maker

Each week we send an email to coaches with one reflection question. It’s a short and easy way to bring clarity and purpose to your coaching. Sign up below (but only if you put people before winning).

At MVMT sports, we make the ‘tools of the trade’ for coaches who want to be difference makers. Our suite of products are designed to enable coaches to plan and review more effectively.

We’re on a mission to help coaches use sport as a movement for good (not bad).

Enter your email address to join us

(but only if you put people first).

We're a mission-driven business for people who believe sport should be a movement for good (not bad).

We make the 'tools of the trade' for difference maker coaches.